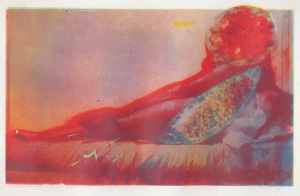 During my practice module last year, I identified a theme of interacting with existing visual culture through collage. Initially influenced by photographer John Stezaker’s use of re examining the use of the photograph to represent truth, memory and contemporary photography in general, I set about making use of my vast collection of charity shop book finds and vintage photography annuals.

Forever frustrated and always a little disappointed with my final photographs previous to collaging, I always knew it was mostly the enjoyment of the process of making photographs for me, but wasn’t sure why this was or how to develop this satisfaction further. After the initial excitement of collaging photographs to create new composite images, this frustration began to emerge once more. What could I do with it once it was ‘finished’? Where do I go from there?

David Campany (2003) talks about the photograph being ‘late’ when used in photojournalism in Safety in Numbness, and refers to Joel Meyerowitz’s large format recording of the World Trade Center site well after the dust had settled. These images have gone onto be some of the most memorable from the time, and even worthy of an hour-long TV special following him as he photographed diligently around the sites. The photograph as a recording medium is old; moving image instantly speaks of the present, a frozen image as the past. This being said, we still relate these still images to an event rather than replaying the video as a internal visual. A photograph is open to interpretation and can change meaning and form throughout time, whereas moving image on television and the Internet tends to stay the same-a documentation of a time or event.

“In its apparent finitude and muteness it can leave us in permanent limbo, obliterating even the need for analysis and bolstering a kind of liberal melancholy that shuns political explanation”

Constantly mesmerized with found imagery from the past, with no connection to any of it except a love for photographs in general, it makes sense that Campany’s above quote relates. I am in permanent limbo trying to analyse every photograph for reason to enjoy it and then suffering the reoccurring anxiety of never reaching the sublime. I bring these photographs together with both conscious and subconscious decisions, one theme leading from the last. To me, the photograph is ‘late’, it is a trace of a time that no longer exists, and I search fruitlessly for extra meaning when I study these traces from a past time. Bringing these interpretations together in collages is my way of retaining them. Taking them out of the time they were created and moving them forward in time. Almost an act of multiple reclaiming, or appropriation takes place in order for my to meet my own desired aesthetic, and I seem to manage this much more easily when using existing imagery rather than constructing photographic images myself for them to only fall flat as an ‘outcome’. Collages are entirely process based, and in essence have made me realise that photography doesn’t have to be solely about the finished outcome, but rather about revisiting and reexamining work until truly satisfied. I am currently exploring this last point to its full extent by moving my collage pieces through more processes, such as screen printing and creating cyanotypes.

Campany, D. (2003) Safety in Numbness (in Where is the Photograph?) Photoworks:Brighton

View all posts by Meg